Being arguably the most powerful, small credit-card sized and single-boarded computer on the market, it has undoubtedly become an important companion for the majority of developers as well as an average people who are interested in the development of different apps and software and the regular computing. Packed with Python and Scratch as a default programming, it can also support most of the programming languages out there including Java, C#, C++, PHP and many more. Programming with Raspberry Pi 4 Model B is much faster and convenient as it comes with a super-portable size which makes us easier to carry it around to the different places. Either it’s for hacking, programming or regular computing, it has never been so much portable carrying any computer where you have to just plug in your peripherals such as keyboard, mouse, microSD card, and monitor to run your computer. 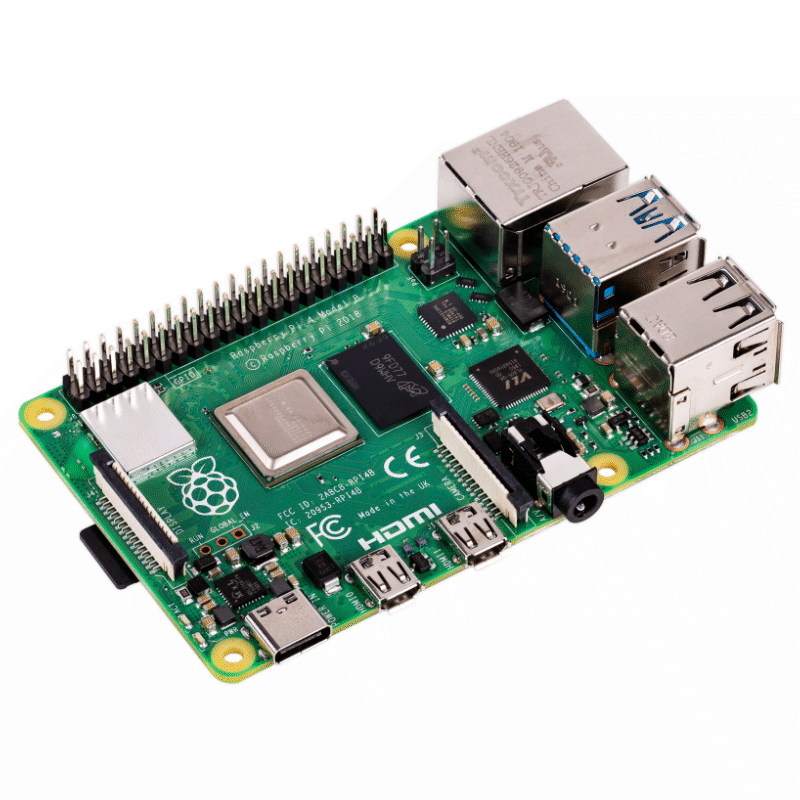 2. Raspberry Pi 4 Model B comes with an option of RAM variant all the way from 1GB to 4GB of LPDDR4 to 3200 SDRAM depending upon the specific model whereas you had to stuck with the same 1GB RAM on Raspberry Pi 3 Model B+. The RAM has been significantly upgraded to provide faster execution on Raspberry Pi 4 Model B where you can get the writing speed of up to 4427 Mbps and the reading speed of up to 4130 Mbps and surprisingly it is 54 percent faster in writing speed and 51 percent faster in reading speed as compared to the Raspberry Pi 3 Model B+.

5. Having a powerful processor is definitely gonna consume more energy, Here in Raspberry Pi 4 Model B, it needs an adapter of 5 volts and 3 amperes to provide power to it. And talking about heat production, it can emit the extensive heat up to 74.5 degrees Celcius at the top part of its processor, which can even burn or damage the board easily in some condition, but the proper cooling system can be provided for an extensive and long term use.

6. Now its a good news for the people who like to do a lot of wiring to the different input and output devices with Raspberry Pi 4 Model B, Raspberry Pi 4 Model B now comes with the standard 40 pin GPOI header with a support of 4 additional 12C, UART and SCI connections. In the same way, the responsiveness and the speed of GPOI pins have also been tweaked and boosted with an improvement of up to 215% as compared to the Raspberry Pi 3 Model B+ for the optimum performance.

7. Here comes the most interesting part, Raspberry Pi 4 Model B comes with the powerful two micro-HDMI ports which can support up to two 4k monitors at the same time, which is arguably the biggest upgrade to it as compared to it predecessor (Raspberry Pi 3 Model B+).

8. Raspberry Pi 4 Model B comes with 2 USB ports which support both USB 2.0 and USB 3.0 from which you can seamlessly transfer your data between the computer and USB drive with a 10x faster speed as compared to the regular USB 2.0.

9. Moving on to the GPU side, Raspberry Pi 4 Model B comes with VideoCore VI with OpenGLES 3.0 support which is clocked at 500 MHz and also the new architecture used in VideoCore IV can throw the output to a connected display up to 4k resolution at a rate of 60 fps (frames per second) but you have to stick with the 4k resolution at 60Hz at single and 30Hz when using the dual monitors at the same time. Due to this reason, most of the user goes with 720p resolution at 41 fps for a smoother and faster experience on both monitors.

10. Raspberry Pi 4 Model B features 2-lane CSI (Camera Serial Interface) and DSI (Display Surface Interface) for establishing the connections to its camera and display from where we can connect our camera via USB port and output to the screen via the micro HDMI port.

11. As compared to an older micro USB port on Raspberry Pi 3 Model B+, Raspberry Pi 4 Model B comes with two USB type C ports from where you can supply the power of 5V/3A to it, though good quality 2.5A power supply can be used if downstream USB peripherals consume less than 500mA in total.

12. Raspberry Pi 4 Model B supports PoE (Power Over Ethernet) though it will require extra PoE HAT.

15. Raspberry Pi 4 Model B can be operated at the favorable surrounding up to 50 degrees Celcius.

Lastly, the biggest question arises here (Can it replace the desktop?). Still, the answer to this question is “No”. Though the Raspberry foundation has been making their Raspberry computer more and more powerful, they are still not in a league for competing with desktop or laptop yet. There are many flaws that need to be improved in the Raspberry Pi 4 Model B or its higher version to compete with desktop or laptop. Here, though it can support the 4k video, it struggles a lot harder even to play the video of 480p resolution at full screen on YouTube though you can do some retro gaming on it. When talking about the normal photo editing you must GIMP on it because it hardly runs the Adobe Photoshop. And it also comes with a Raspbian OS which is a Linux based operating system due to this reason it lacks many features and software that are available on Windows and macOS.

Despite these issues, I think that Raspberry Pi 4 Model B is a good bang for your money. The price of this computer is extremely unbeatable, where you can get the 1GB RAM model at just $35, 2GB RAM model at $45 and the 4GB RAM model at $55. If we also compare it to the price of the regular low-end laptop, it is undoubtedly 65 times cheaper or more than a regular laptop but out there but still provides comparable performance. Apart from its minor flaws, it can pretty much provide you the ability to perform the same task that can be done in a various regular laptop or desktop. Either it’s for writing, reading or editing your different type of blogs, news, articles, etc or surfing the web with the multiple tabs opened on your Chromium, it can deliver you the smooth switching between your tabs without any lags. And the best part is, you can also use Libre Office or Google docs without any performance issues to create different types of documents, spreadsheets, etc on it.

By being able to deliver the feature like 4k video output up to two monitors at the same time from the size of credit card, it is arguably the great step forward for the development for portable, cost-effective and noiseless computer. And I think that we should give a huge shout out to the Raspberry foundation for always producing the most affordable computer and improving it over time. Now with the Raspberry Pi 4 Model B, you’re not limited to the same bulky laptop or desktop which requires hundreds of dollar to purchase. Now at just price of $35 dollar, anybody can own the Raspberry Pi 4 Model B from where they can perform their pretty much day to day activities regarding the use of the computer.

This website uses cookies to improve your experience while you navigate through the website. Out of these, the cookies that are categorized as necessary are stored on your browser as they are essential for the working of basic functionalities of the website. We also use third-party cookies that help us analyze and understand how you use this website. These cookies will be stored in your browser only with your consent. You also have the option to opt-out of these cookies. But opting out of some of these cookies may affect your browsing experience.
Necessary Always Enabled
Necessary cookies are absolutely essential for the website to function properly. This category only includes cookies that ensures basic functionalities and security features of the website. These cookies do not store any personal information.
Non-necessary
Any cookies that may not be particularly necessary for the website to function and is used specifically to collect user personal data via analytics, ads, other embedded contents are termed as non-necessary cookies. It is mandatory to procure user consent prior to running these cookies on your website.
SAVE & ACCEPT